Editor’s Note:  As of this post, Points will be going on a “holiday hiatus” schedule– a light posting regime that reflects the editorial crew’s commitment to spending the holidays doing life rather than history.  We’ll resume regular posting at the end of January 2013.  I should also note that this will be my last post as Managing Editor; Eoin Cannon will take over that role next month with elan, aplomb, and a host of other personal traits that sound like exotic desserts. 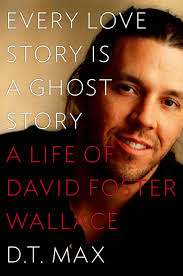 Given that the idea for Points originated when I wrote  a reflection on David Foster Wallace’s death for the ADHS “Daily Register” back in 2009 (scroll about halfway down if you want to see it), it seems fitting that my last editorial effort here is the interview that follows with D.T. Max, author of the impressive new biography of Wallace, Every Love Story is a Ghost Story.  With the help of Rich C., one of Wallace’s sponsors, Max has constructed a picture of the author’s life that gives addiction and recovery the pride of place they deserve.  This account reveals a hugely gifted intellectual struggling not only with clinical depression, but with another conundrum– less clinical but still debilitating: how to speak and write the language of the heart in a world that values the body and the head over that more delicate organ.

Points: Not much of the critical literature on DFW attends to the role of addiction and recovery in his life and work.  Your book puts them at the center, arguing that his participation in 12-Step culture accounts in many ways for this turn away from postmodern form and (non)feeling  and towards fiction that is earnest, morally engaged, and “‘about what it is like to be a fucking human being’”  (178).  Can you talk a bit about how you came to see addiction and recovery as central to our understanding of DFW?

DTM: I think the single biggest force on David, from the time he entered a twelve-step program in 1988 for the first time until his death, was that program. I think over time its core message—the need for human interaction, being modest about your self and your powers, humility before your situation—become his core literary positions as well. In the program DFW turned his back on what he saw as his callow, show-offy youth.

Points: Despite making recovery central to the DFW narrative, you are scrupulous about anonymity, never naming what sort of groups DFW participated in.   AA’s Eleventh Tradition (“Our public relations policy is based on attraction rather than promotion; we need always maintain personal anonymity at the level of press, radio and films”), which has been adopted in various forms by many other recovery groups, makes research on individuals involved in recovery very difficult.  How did you undertake this effort?

DTM: I just asked. I respected peoples’ decisions. I found that anonymity was not something everyone felt was necessary and for some it even spoke of a stigma they believe twelve-step programs ought to have long outgrown. I left it to personal choice, only promising that if participants did not wish to be identified or wanted to be identified only by their first name and first initial of their last name that was fine with me. One friend of DFW’s, who knew him both before AA and after, and to whom I spoke several times while researching the book, says that anonymity is not really for the oldtimer who has experienced the spiritual transformation that is promised to be a consequence of working the Steps with rigorous honesty.  Rather, he says, it is for the newcomer who still is ashamed and humiliated and who no longer wants to bury those feelings in a bottle.  It is a common joke in AA that newcomers are afraid they might see someone they know in a meeting.  That is, of course, simultaneously ironic and absurd.  The overall point is that anonymity is for the newcomer’s sense of safety and security.

Points: You’ve written at least a little bit about another important late-20th century writer for whom addiction and recovery were key—Raymond Carver.  The styles of the two authors couldn’t be more different, but I’ve always felt they shared a taproot interest in the importance of human connection in an age where such connection is increasingly difficult.  What, if anything, did DFW think about Carver—as a writer and/or as a fellow traveler in sobriety?

DTM: David  is on record as being an admirer of Raymond carver—in contrast to the many writers who just wrote like Carver–but nowhere does he talk about wishing to emulate him. If he felt a biographical connection it’s hidden.

Points: Early in his sobriety, Rich C., DFW’s friend and sponsor in Arizona, gave him some Bob Earl tapes, which you say were an important inspiration to him (112-113).  For those not familiar with the 12-Step custom of circulating tapes, can you explain who Bob Earl is? What in his story might’ve been particularly galvanizing to DFW?

DTM: My understanding is that AA has a lot of retreats and “round-ups” and home group meetings that feature one speaker who tells his or her personal story about “what it was like, what happened, and what it is like now.” There is an unofficial speaker’s circuit for this in the regional and national grapevines, and people who are especially eloquent are often asked to speak at these meetings.  Bob Earl, Clancy, and others, especially those who live in Southern California, often become highly sought after.  Bob Earl is a sometime television show writer who is himself in AA and whose tapes about how to get beyond the pain of non-drinking have helped a great many alcoholics. I don’t know much more about him but you can google him and learn most of what I know as well, beyond that so many people find his lectures helpful.

Points: You treat in passing the difference among 12-Step groups, noting that some incorporate “therapy-like techniques” while others, like the group DFW attended in Tucson in the late 1980s, are “Big Book fundamentalists” (113).  People tend to have strong loyalties to one version of the program or another; do you have a sense that DFW allied himself with one vision over time?

DTM: I think David liked things simple in his twelve-step program. I think he wanted the clichés, the group sessions, sponsoring and being sponsored. I don’t think the therapy-like setting appealed to him in the same way.  His sponsor once asked him, “If you are so smart, what are you doing here?”  He described this zen-like simplicity as a sword slicing through the Gordian knot of the “smarts” that got him into AA.  As they say to newcomers, “Your best thinking got you here,” and the compulsive kind of thinking that alcoholics call “running your head” is solved through simplicity of action, of just “showing up” and “working” the Steps.

Points: Following up on that, you mention that when DFW first hears what you call the “fundamentalist” 12-Step position (298) that all drugs are “a crutch,” including psycho-pharmaceuticals, his friend and sponsor Rich C. gives him some program literature that argues differently—something like AA’s “Medications and Other Drugs.”  Through the ‘90s DFW continued, on the advice of his psychiatrist, to use Nardil, but you write that the fundamentalist anti-drug belief never left his mind, and contributed to the downward spiral that resulted in his suicide.  This issue is treated in very compressed fashion in the book; can you expand some on DFW’s evolving thinking on this matter?

DTM: I suspect getting off Nardil, the prescription antidepressant he began taking in the mid 1980s, was never far from his mind. He wanted to be completely drug-free and tried to be so twice. You also have to keep in mind that he felt antidepressants interfered with both his writing and the intensity with which he perceived life. These may in the end have been bigger motivators for him in going off Nardil.

Points: Since the book appeared, it’s gotten a lot of press and you’ve done a lot of interviews and events.  Have you had much conversation about the addiction and recovery dimensions of the story with your readers and, if so, what’s that been like?

DTM: I think the most interesting aspect is that a number of people who were sponsored by David or in twelve-step groups with him have come forward after readings. I can usually guess who they are–they listen with a certain set of ears. One thing that’s been confirmed is that he was a remarkable sponsor to quite a few people.