Let me admit it up front.  It was an indirect connection.  My local public TV station in El Paso, KCOS, decided to produce a short piece on “Prohibition on the Border” that would be tacked on to the third segment of Ken Burns’s documentary on Prohibition.  Judging from the relatively small number of comments along the lines of “hey I saw you on TV last night,” I’m guessing that not that many local viewers made it to the end of the third night.  I certainly didn’t.  But I set the record button so that I would be sure not to miss my own insightful commentary.

I found myself strangely reluctant to watch.  Finally, several nights later, battling insomnia, I fast-forwarded through the eminent historians (although it seemed to me some odd choices?) recruited by Burns to get to the really significant stuff—me.  After about 30 seconds I’d had enough and put off watching it all the way through for several more days.  Bad camera angle. Creepy voice.  Aging professor.  Hair loss.  Too painful.

The process had begun during the summer when I got the call from the local producer.   I would be willing to participate.  My research on alcohol in Africa and a couple of semesters teaching a course on “Drugs in the Modern World” apparently made me think I’d have something to say about prohibition on the border.  I assumed in any case it would come to nothing.  But in September I met with the two producers and talked for an hour or so about the national and global history of prohibition and about its local impact (something that I knew a little about thanks to papers that several students had written for me). 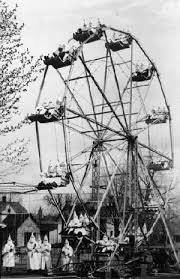 Several weeks later I went to the lobby of El Paso’s leading downtown hotel to be filmed—its  ornate décor and the Tiffany dome in the bar meant to evoke the 1920s.  For an hour or so I responded to questions.  I told the history of El Paso’s 1918 unsuccessful referendum on prohibition and the anti-Mexican backlash it provoked.  I talked about how that backlash played out in the emergence of the KKK in the city in the 1920s and its connection to the wet-dry debate and to efforts to close the bridges to our neighbor city in Mexico, Ciudad Juárez.  I emphasized the enthusiasm and promise that many felt for Prohibition and the positive impact that Prohibition had in El Paso and elsewhere—from the point of view of those who supported it.  Not surprisingly, I got questions about the links between Prohibition and the current drug war that torments the border region.  I focused on discussing the growth of alcohol production in Mexico during Prohibition and the development of smuggling enterprises that would later move the drugs trade.  At the same time I cautioned against making easy comparisons, citing the huge public health impact of (legal) alcohol consumption today and the questionable benefit of making it legal for people to purchase heroin and cocaine.

Three other “authorities” were also filmed although we never had any chance to interact:  two colleagues of mine from the University (Howard Campbell, of Anthropology, and Tony Payan, of Political Science, both of whom have published on the drugs trade) and one non-professional historian, Bob Chessey, who is writing a history of border life and trafficking.  All of that footage was distilled into just ten minutes, alternating images and talking heads woven together by a ponderous PBS-style voiceover.  All of my efforts to suggest some alternative perspectives were sacrificed to a clear narrative argument summed up in the last seconds:  in the midst of the current drug war we have lessons to learn from Prohibition—that efforts to ban drugs breed violence and are bound to fail.

Predictably enough, given El Paso’s tendency to deny its history of ethnic and racial conflict, the relationship between alcohol and drug regulation and ethnicity didn’t make the cut.  Still this brief ten minutes may be of some general interest.  Former El Paso City Councilor and now candidate for Congress, Beto O’Rourke, made national headlines several years ago for promoting a seemingly innocuous resolution (at first successful then retracted under pressure) calling for a reconsideration of US drug laws.  I wonder to what degree the drug reform argument of “Prohibition on the Border” had been determined before any of us were ever interviewed?  And I wonder too how widespread nationally has been the “natural” conclusion—drawn in this program–that the national Prohibition experiment teaches us that drug prohibition is bound to fail.  You can look for yourself– but please, no criticisms of my hair.