Singer Amy Winehouse’s death on Saturday was one of those occasions which brings not so much drugs, but the relationships between addiction, fame, and art to the forefront of public conversation. The presumption that Winehouse died from an overdose is supported only by anecdotal reports at this point. But whatever the cause of her death, her binge drinking, drug use, and stints in rehab were well documented. What really places her at the center of the addict-artist discussion, though, is how explicitly her lyrics included the subject matter of escapist intoxication, destructive behavior, and regret. She subjugated these elements to the perennial songwriting theme of heartbreak, but within that framework she wielded drug and alcohol imagery in unprecedented ways. Winehouse’s confessional style made central to her lyrics what had been background gossip in the tragic identities of the great female jazz vocalists she emulated. The result was that for fans, the combination of autobiographical songwriting and intense tabloid scrutiny created a kind of ongoing, multimedia life narrative.

When I wrote for Points a few months ago on songs about rehab by Shane MacGowan and Warren Zevon, I said I wanted to bracket and set aside what I knew (and what is knowable) about those artists’ lives, in order to be able to get at what treatment clinics are doing within the formal systems of their songs. I concluded that such institutions play a mediating role, allowing for an artistically productive detente between the sentimental expectations of recovery narrative and the romantic impulse to defiant self-destruction. I maintain that it’s important to resist the sometimes overwhelming claims of biography, which have a tendency to push aside a work’s internal composition and diminish other ways of experiencing it. But an apparent overdose death has a way of forcing an addict’s life back into the conversation. It would be cold-blooded, and ultimately dishonest, to go too far into an artist’s use of addiction as a theme without turning to evidence of that “theme” in the person’s life.

The Title Says it All

To some, for good or ill, Winehouse’s relationship to drugs will be defined by her biggest hit. “Rehab,” the lead single off “Back to Black” (2006), narrates a refusal to go for treatment, and insists that 1, heartbreak is the primary condition, and 2, cathartic soul music is its proper medicine. With three Grammies in 2008, including Record of the Year and Song of the Year, it is probably the most successful song “about” addiction ever recorded. But Winehouse’s attitude toward alcohol and drugs need not be defined by this romantic rejection of therapeutic aid. That is, she seems not to have been an especially “unrepentant” drinker/drug taker. The whole arc of “Back to Black” describes regret at what careless, drunken behavior has done to a cherished relationship.

In interviews, her attitude to treatment was not as the speaker of that lyric. The backstory she described involved being pressured by her management team to go into treatment, so as to reassure a nervous record label. She often discussed her problems as problems, and she did indeed go to rehab, several times. If her stumbles seemed endless, that may have been because of the scrutiny they received from the media and the extent to which they came to define her public identity. It’s impossible to quantify, but it seems likely that her pattern of using, attempting to quit, relapsing, and trying to get help was not very different from that of many people who successfully get sober around the age of 30. She also revealed in interviews the kinds of multiple diagnoses that compound and prolong addiction’s effects: depression, bulimia, cutting. These are the kinds of simultaneous conditions that complicate even expert definitions of addiction, and have gender valences not easily reconciled with abstract dichotomies such as the romantic vs. the therapeutic.

Finally, one aspect of “Rehab” that’s rarely commented on is that its central refusal takes place in the treatment facility itself, during the intake interview, with the collaboration of the interviewer:

The man said ‘why do you think you here?’
I said ‘I got no idea I’m gonna, I’m gonna lose my baby
so I always keep a bottle near’
He said ‘I just think you’re depressed,
this me, yeah baby, and the rest’

As in the Zevon and McGowan songs I discussed, this scene set in the rehab facility itself seems necessary so as to engage with the inescapable therapeutic paradigm while not foreclosing an older, artistic frame for giving order to a suffering that is more universal — in this case the tradition of female vocalists expressing subjective breakdown in the form of a romantic collapse. 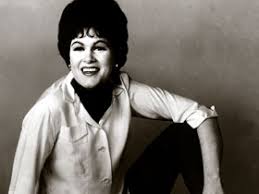 She Also Fell to Pieces